Advice I would have given myself at 21

Nobody suggested it would be interesting


Nobody said it was easy
No one ever said it would be this hard.
No extravagant claims were made during the interview for the role, pretending that it would be uplifting, fulfilling, contribute greatly to society or even be enough to keep you awake during most of the day. There were veiled mutterings along the lines of there's actually nowhere else to go from here, no promotion escape route, no way of seeking a more demanding role. This is it. And they failed to mention that my predecessor had not stayed longer than a few months. But, my choice, I accepted the job. No complaints there.
And so here l am. Bored. In fact I shambled across the boredom threshold sometime back and am now trying to see if there is a limit to boredom and what may lie beyond peak boredom, in the way perhaps, that philosophers used to contemplate what came after you reached the rim of a flat earth. There may even be grades of boredom, like the Beaufort scale for wind speeds or Mohs scale of hardness. In fact I've invented one (see below).
I was asked again, just this morning, was I enjoying the job. Why is everyone so concerned about 'enjoyment' of a role. I don't think I look suicidal or someone about to walk off site permanently, though the glazed look I get in my eyes around about 3pm is an indication of my daily cerebral cortex shut down for my brain's protection. My stock answer to the question is ‘I can tolerate it’. And I can. Though there was small incursion, for a day last week, into a 'Nope, now I'm actively not liking this’ zone.


Now I don't like to think of myself as prideful. I've done many a mundane and unpleasant job in the past. How can I ever forget cleaning a large Welsh sewerage works at 0800 on a warm summer's Monday morning. I just can't, not even with therapy. Then there was the garbage truck summer job where there were real metal ash cans that you had to lift onto your shoulder and empty into the truck with the ash and other garbage blowing back into your face. None of this softie mechanical handling for us. Some of the residents would neatly tie their pornographic magazines up in bundles for us so we could read them at lunch time. How thoughtful. How graphic. Rather put me off my sardine sandwiches I can tell you.


I work in what you'd call an industrial environment if you were being kind. This does not comprise shiny state of the art Macs and clean, modern, comfortable office furniture, oh no. I've cleaned my desk using antiseptic wipes, I clean my keyboard weekly, my workspace and bin get cleaned/emptied every full moon and the heating is either a barely adequate wall mounted electric convection heater or a wheezing electric fan that sounds like a Boeing spooling up. The space where I work is partly a dumping ground for amputated office chairs. They’ve come here because, well I’m not sure, probably because no one could think of anywhere else to put them. Still, it is my space and I can concentrate on the tasks I'm set.


What you have to do, of course is find coping strategies. For boredom the course. I have discounted alcohol and drugs sadly. Apple music is particularly helpful and I'm making way through their back catalogue quite steadily. You have to look deep into your reserves to survive the numbness. I have become rather good at The Times crossword at lunchtime and this proves a useful d_st__t_n (11, a thing that prevents someone from concentrating on something else.). I go for walks around the site with self set tasks. However this is a little weather dependant and today it has rained and rained thus causing me to stay largely inside and become ever so more like Marvin.


There must be something you like, I hear you say. Ok can tolerate then.


The short, 15 minute drive, against the traffic, to and from to work. The hours are OK. And, and, oh the pay-check. I didn't really need it when I started but, as life goes, circumstances have changed recently and it is coming in very useful. It's a short term thing so I’ll be interested to see if I can maintain my stoicism when the need goes.


And this is the advice I'd give to my 21 year old self.
'Get a job where you care about what they do. Don't just accept any role (unless you are desperate) even for big money - there's never any long term satisfaction or fulfilment in it for you.'

A long time ago I thought I could take my transferable skills to any industry. I was wrong. Well actually I was right as I did do exactly that. However the life lesson for me was ‘You have to care about what you do.’ I quickly found out I didn’t care about the outcomes and products and my move was a disaster; I had to leave as soon as I could. I've learned that if you care about the outcomes, or the organisation, it's far easier to tolerate the boredom and mundane nature of work that every job has. If you don't care about it then every day becomes hard and mistakes are more prevalent. And you clock watch constantly for the moment you can leave. 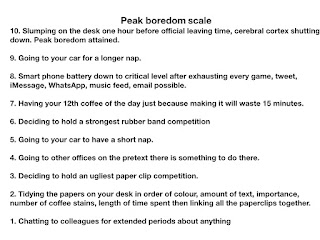 Don't boil the frog. The podcast.

Working fewer hours than you want or need?
Over educated for your current role?

Underemployment - pernicious. As bad, in my view, as being overloaded with work, and can be just as damaging, if not more so. I tell all (well some) in my latest podcast.