'I'm so tired, my mind is on the blink', The Beatles

I could have lain down on a frosty lawn this morning and slept. In my ongoing quest to stay moderately fit I still go running, usually at 0630 in the morning, so as not to frighten the neighbours and alarm the local dog population. At the speeds I achieve running the slipstream is causing ice burn on my exposed extremities and I recall David Niven's anecdote about he cured similar problems after skiing: I couldn't find any brandy at 0700hrs and even if I could have I'd have drunk it and not poured it over the affected area like he did. The cold does wake you up though, which is just as well as I am so tired and could have just had a little nap after running a few steps. Until I discovered that it was really minus 4 C.

Anyway back to tiredness - this is what happens when you get tired, your mind wanders. Now that I have a longer term job much of the angst and worry that unemployment causes has left me. Yes I still need to get a full time job but the kids will not be in the Workhouse for Christmas and we can buy a few presents. Now the immediate future seems a little brighter I have relaxed: this happened quite suddenly in town a few days ago and I almost immediately fell asleep, which was a shame because I was in the queue at Boots at the time and it caused a small commotion until the customers behind me decided to use me as a mini roundabout until I woke up. And who says there is no compassion left in this world?

It's very strange. I mean nothing has really changed. The job I am doing is basically the same hours and the same tasks, Mrs EoTP is still working and will continue to do so but it is the knowing that there is some sense of continuity. It's all artificial - may I remind you of my favourite Woody Allen joke 'How do you make God laugh? Tell him your plans.' The universe is a big, random, unfeeling sort of place. It doesn't care if I have a job no matter how much I rant and think it monstrously unfair so it could go horribly wrong in a few days again.

However I have seem to have entered the TATT zone, that is to say Tired All The Time. I've had boundless energy over the last few months. I could moan for hours without a break. Shopping, pah, I spit in the eye of shopping. Cleaning, pshaw I care nothing for it, me and my Marigolds. Cooking. Well OK that really hasn't been my strong point, or weak point come to that - it still defies classification.

It's like children in the long Winter term at school. They struggle along for the full 12 week term, getting alternatively cold and wet going to and from school. Finally they make it to the Christmas break. Then they fall ill. Colds, flu, headaches, you name it they get it. I think I'm the same, heading for man flu I'm sure.

I'm looking forward to the break - can't wait to ruin the Christmas dinner, though Mrs EoTP is starting to think that letting me loose on it may not be such a great idea after all. I may be relegated to the preparation of the brussels sprouts, can't do much damage there. At least I will be able to sleep after the meal (and the drink).

So I'm having a break from the blog until after Christmas - may I wish all of you a Happy Christmas.

Eyes on the Prize 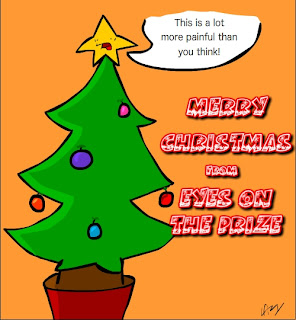 Anyhow I have felt embattled over these last 259 days of unemployment. Perhaps my frustration has seeped through into this blog from time to time. But we may have a resolution for the time being. A white knight has galloped over to save me from the dragon - or perhaps he's sent his squire on his bike as I've got a nasty paper cut. Whatever. The organisation I have worked for during the last eight months on a part time basis has offered me a job on a full time basis. Yeehaw and throws hat into air. Well to be strictly accurate, a full time job working 4 days a week on a full time basis with a mutually agreeable escape clause for when I find that elusive of animals, a well paid full time job.

Now I am delighted.
No signing on next week.
No claiming the mortgage protection insurance.
A combined income that is equivalent to about 80% of what I was earning.
OK no car/fuel/office and so on but hey - money and no need to have the kids in the workhouse.
And it starts from next week.

This is a huge relief to us all in the EoTP family and we permitted ourselves a spending binge, buying a small bar of chocolate to eke out between us before before the one guttering candle we allow ourselves for illumination in the house during the long winter nights.

OK we hit John Lewis and had a big spend. But it was quite hard. We have all become so used to not spending anything except on priorities that to spend on a luxury item felt, well, reckless for the sake of a better word.

Of course they know and I know that I will leave as soon as I get a five day a week job that I like. But, and this is a big but, I do enjoy working for and with them and my quality of life is much improved over what it was. In fact it's even better now that the 600lb gorilla of impending unemployment has been shipped back to the zoo.

So that's why I say this may be the end of the beginning - still have to find that other job, still looking and will not give up.

Christmas will be a lot happier occasion for us all though. Now I can look forward to it.

I did say to Mrs EoTP that I could look for another job to fill the spare day.

'How about the shopping and cleaning?' she said. 'That's a job.'

Where did I put my yellow Marigolds?
Posted by Dave Watts at 14:07 No comments: