94000 jobs. Added.
To what?
To Father Christmas's present list? Because all I can find is a sous chef post in Dundee.

And hallo blog. Back again and rather sooner than I'd hoped. Well, actually I'd hoped that I wouldn't need to be back at all but then there was the recession. There is the recession and, as far as I can tell, there will continue to be the recession. Look it's quite easy. I had a job, a job I liked very much and then the recession hit. They couldn't renew my contract and that was that but...three weeks later I got a fixed term contract that lasted for, well the fixed term. That was OK'ish, 60% eye wateringly less salary than I had been earning, but it was in the public sector and I thought, clearly naively as it happens, that I'd be able to find a full time position before the fixed term was up.

The Gods said 'Did you hear that, he said he'd be able to get a full time position?' and showed me the error of my ways. During that 15 month fixed term I applied for 27 jobs, had 3 interviews and, as you can deduce if anyone is reading this, no offers of employment. So here I am again 6 weeks into my umpty umpth period of unemployment and it's still the recession. And will continue to be the recession. It feels as if there is always a recession but is that just me? 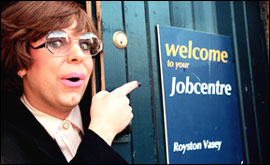 Back in my favourite chair in the Job Centre I continue to sign on with quite a bit less condescension from the staff there than in the past. Gary, who 'served' me on my first signing this time round, commutes 120 miles a day to get to the Job Centre. He's a graphic designer in his mid 30's who couldn't get a job where he lives. Steve, who signed me on last Thursday, is a purchasing manager in his mid 50's who was unemployed for over 8 months before he got the part time job of inflicting pain from the other side of the counter. This still doesn't stop them making you go on the mandatory 'How to write a CV' and 'You really need to get a job now you know or things will get sticky for you have you seen our cattle prods?' hour long courses. Remember Pauline from 'League of Gentlemen'? Just like that. Like medical interns they've had to do it so now you've got to do it. This time they say, because they know 'Of course it's a complete waste of time.' Gee thanks, there's another hour of my life gone that I won't get back.


Because, sadly, I've been here before then I know the routine. Upload CVs to Monster, TotalJobs, TotalWasteofTime, WeignoreyourCVbutpostitmonlineanyway and so on. Scour Reed everyday for a position that pays more than minimum wage and doesn't involve being an IFA or self employed employment consultant (sound of snigger coming from EotP). Why so many IFAs? I thought we were all skint? I don't need advice on where to put my £65 Job Seekers' allowance thank you I just hand it over to Tesco. Scour every on line job resource until my eyes are red raw and my heart has sunk so low I'll need help from the Chilean miners' rescuers to recover it.

And then you get the email from some aggregator jobs site that proudly proclaim 94520 jobs added in the last week. As I ask right at the beginning just where are these jobs added? To the German economy perhaps? When I look at these proud posts I find jobs in Perth, or London or possibly Reading, but NOT where I live. Not even commutable from where I live.

I haven't yet reached the point of 'I'll do anything rather than sit in the house all day long' but it's not far off. But, and this is a good but, just whose going to employ me when they know that I'll leave as soon as a reasonable job elsewhere comes up - in about 8 years at this rate?

So back in the blog. Swept out the dust and leaves that had blown under the door, plumped up the cushions and assumed the position.

Eyes on the Prize
Posted by Dave Watts at 16:12 No comments: