The burden of work 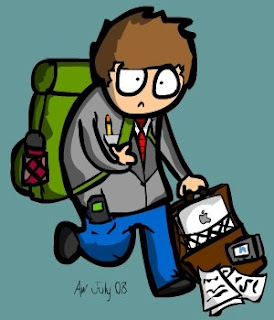 It's all in the cards

I am a man of many identities. I know this to be the case as I have the papers to prove it. These are, of course, business cards and I have about 20 of them charting my career as it, too, has careered over the years. From account manager level to Director level and, my all time favourite, no job title at all level, they rest in peace in a box somewhere in the house so I show my kids the rise and fall and fall of my career.

At the moment I actually have two different business cards. How cool is that? One set for my three and half day a week job and the other set for the other organisation I was desperately needed for, sign the consultancy agreement papers NOW and send them to us immediately is there anyway you can hand deliver them there is a job that needs doing NOW, can't wait, hurry, hurry, hurry we'll print you business cards and FedEx them to you. Actually that was four months ago now and yes, you knew it really, it never actually happened.

But what happens to these cards, I mean does anyone actually do business with them? I diligently collected other people's business cards for years on the basis that they 'might be useful.' I have them here, right now in this purpose designed business card holder with the words 'business cards' picked out in sky blue Dymo tape on the top, in case I was under the illusion that it held a Faberge egg perhaps?. What's even more astounding is that they are in alphabetical order. That's why, presumably, I have the Mayor of Cordova's, Alabama card. Now I can't begin to remember why I have his card, where I met him or why I though this would be useful. Here's some others. One for an online used car sales company (out of business, I just checked), a paint shop in Singapore (just in case I needed some paint as I was passing through?), Banco Fiat in Sao Paulo, the delightfully titled Directeur de l'Observatoire in Paris, a barrister (ominous) with his name, telephone number and one word title (full marks for going overboard with design there), one for Gasper in Sao Paulo (who was Gasper, or what?) and one in Arabic on one side and Japanese on the other.

I can honestly say that I have never contacted these people again. And they haven't contacted me either but we all go through this rigmarole of handing out these little paste cards to each other. For some reason. Of course, like so many things, cards have become more and more ingenious. They have changed size, they are bigger/smaller, open out like a folding ruler and some are quite clever bits of origami. You know the sort you can't fold them back up properly afterwards, like a large newspaper after you've read it. I've got transparent plastic ones, ones with people's pictures on, square ones, ones written on rice grains, three dimensional cards, holograms, ones that don't exist in our time space continuum, ones printed on the back of live animals that I now have to look after, talking cards and even mini CD cards that you are meant to put in your PC computer tray and then look at. And look at them you will for ever if you put them in some CD trays because they never, ever come out again.

So all this effort to create attractive cards that represent one's business and capabilities and they all get put in a little red book with blue dymo tape for ever until they are forgotten. How sad. I did have a really groovy one, when I was self-employed, that was designed by my friend, a terrific graphic designer. The design wowed people, they would stop in their tracks and admire the striking design. They never called me though and I sent out/gave out hundreds of them. Would you like one, perhaps a box of them I have several left over?

Then there is the ritual of the exchange of cards. If you are the one entering into an office you always have the advantage - card already secreted in a pocket you whip it out and hand it over with a flourish - there that's my credentials so now you have to take me seriously. They, on the other hand, immediately dive into a drawer stuffed full of loose elastic bands, staples that have escaped from the box, fifteen pens that don't work and twenty seven pencils that you keep meaning to sharpen if only you had a pencil sharpener, 126 paper clips all connected together from when you had that really boring on-line conference that took hours, six memos that you meant to reply to but had lost, sixty seven business cards from previous visitors and a year's supply of PostIt notes and mutter 'I have one here somewhere' and then hand you one with a coffee stain on as they can't find a coaster for the coffee either. Then you leave and your card becomes the sixty eighth. Of couse there are always the dreaded V cards, little attachments to emails that are meant to update your central collection of business contacts - somehow these never seem to work and get deleted.

Then there's people's titles; Grand wizard, Associate (i.e we don't actually employ them), Gerente Geral (sic), Head of Group Synergies (you just know from that that there aren't any), TQE District Manager and so on. Some put all their academic qualifications on: GCSE in woodwork, ironing and coracle weaving, along with the big ones: B.Sc (HONS), M.A (HONS), FRIXT Assoc, GMINT Acc, FRIAPP (Fellow of the Royal Institute of Associated Pygmy Photographers) or whatever. They have a qualification and boy are they going to make sure you know it, whether they actually earned it or paid an annual fee to have membership to the association.

It's all now lost on me anyway - as soon as I get a card that I know I will need the details for I write them in my Filofax anyway.
And throw the card away.
Posted by Dave Watts at 14:12 No comments: